50 years of the Fantastic Four 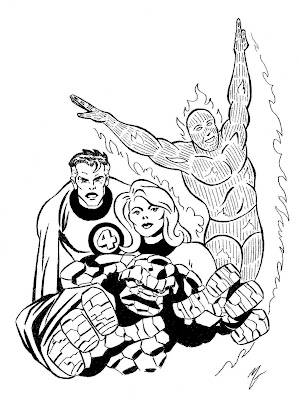 This month marks the 50 anniversary of the First Family of Super-heroes, Marvel's Fantastic Four.
In the first issue we were introduced to Reed Richards, the stretchable Mr. Fantastic, his girl friend Susan Storm, who became the Invisible Girl. We also meet Sue's hot-headed little brother Johnny who becomes The Human Torch and of course Ben Grimm, The Everlovin' rockbound Thing. These four individuals, changed by Cosmic Rays set the stage for Marvel's revolutionary comics that would change super-hero comics forever!
Stan Lee and Jack Kirby gave the world super-heroes who acted like you and me and just because they had extraordinary powers didn't mean they didn't ordinary problems.
In the few years that followed, Stan and Jack (and a whole other stable of talented writers and artists) gave us a brand new universe that looked familiar but was populated with Marvels that protected our world. And the special part of these Marvels (and who they were as individuals) is that they could be you or me.
I love the Fantastic Four and even though they only exist in the "Funny Books", I feel close to these characters because they are so real and that I could be a part of their family in some small way. The Fantastic Four ARE a Family first and a team of heroes second. THAT'S what makes them special.
Or should I say "Marvelous"?

NAH! Make that FANTASTIC!
Posted by Marc Greisinger aka "Alex the Goon" at Sunday, November 20, 2011 No comments: