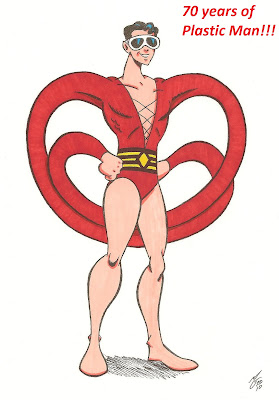 This month marks the 70th Anniversary of the first appearance of Plastic Man in Police Comics #1.

Created by Jack Cole, Plas was former small time hood Eel O'Brian who during a heist was shot and bathed in experimental acid. O'Brian fled into the woods and passed out only to awaken days later in a monastery. The monks who lived there had treated the Eel's wounds and brought him back to life.

While recouperating O'Brian discovered that the strange acid had affected his body and he could now strecth his body great lengths and change into different shapes.

Being moved by the kindly monks unselfish act, O'Brain swore to use his new incredible powers to fight crime and make up for his past misdeeds.

Eel O'Brian was no more and so was born the strechable super-hero, Plastic Man!

Plas was created by Jack Cole who had a background in gag cartooning and used this talent and his great sense of comic timing to tell the hilarious tales of Plastic Man's fight against crime.

Cole's run on Plas is one of the great highlights of the Golden Age of Comic Books and have been reprinted in the DC Comics Archive series of books. I highly reccommend them.

Plas is still going strong today. He is a member of the Justice League of America and has been recently featured in the Batman The Brave and the Bold animated series on Cartoon Network.

I love Plas and he is one of my favorite super-heroes. Anytime I want a fun and entertaining read, I pick up a Plastic Man Comic Book and enjoy the ride.

Posted by Marc Greisinger aka "Alex the Goon" at Monday, August 22, 2011 No comments: